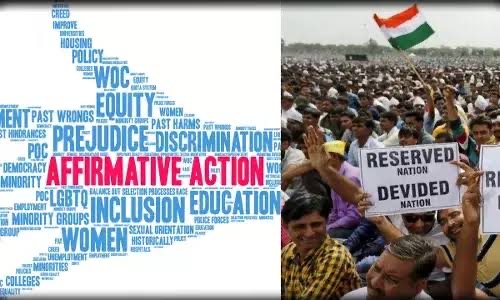 The amendment added clause 15(6) and 16(6) in the constitution which allowed state action of providing for reservation for EWS, which in itself is a permissible affirmative action, but to the exclusion of categories mentioned in Article 15(4), 15(5) and Article 16(4).

Various petitions were filed before the Hon’ble Supreme Court of India challenging the amendment for being discriminative against backward classes and violating the basic structure of the constitution.

A Five Judge bench of the Hon’ble Supreme Court, in Janhit Abhiyan v. Union of India [1], delivered its judgement on November 7, 2022, upholding the constitutionality of the 103rd Amendment in a majority of 3:2.

Arguments in the case

Challenging arguments, by the petitioners, relied on Constituent Assembly debates, the Preamble and various judgements of the Hon’ble Supreme Court, to show that the concept of reservation itself was to address historic inequalities and that the special provisions for specific classes is an action of positive discrimination, which in itself forms a congenital feature of the basic structure of the constitution. The reservation which the amendment propounds to create is not for a class, but for a section of society which will exist indefinitely, based not on economic condition but financial incapacity and which rewards poor financial behaviour; thus is not reliable for reservation.

The petitioners pointed out that there is no reasonable classification for the creation of the class, and the created classification does not have any nexus to the object to be reached, thus violating Article 14 [2]. Economic criteria as the sole factor for reservation had not been accepted earlier, and the ceiling limit of 50% is breached by the said amendment [3]. A few arguments were made that the amendment could be sustained if the phase “other than” was read down [4] by the court to be “in addition to”. Lastly, reservation cannot be used as a poverty alleviation scheme to reach development goals.

In support of the amendment, the Union of India argued that the amendment does not violate the basic structure, but fosters it, and that a constitutional amendment can be struck down only when it changes the identity of the constitution [5]. Creation of a new class fosters ‘economic justice’ and reservation for EWS is maintainable, as seen under Right of Children to Free and Compulsory Education Act, 2009 [6].

It was further argued that exclusion of classes already mentioned in Article 15(4) and Article 16(4) does not violate equity code and is necessary to avoid dual benefit. The 10% ESW reservation is in addition to the 49.5% existing reservation for categories under the said provisions. Moreover the concept of equality and reservation is changing and evolving, and such affirmative action must be positively interpreted to benefit the targeted class.

The minority judgement was delivered by Justice J Ravindra Bhat and the then Chief Justice of India, U U Lalit. They held that economic criteria for educational reservation under Article 15 was acceptable, however EWS reservation under Article 16 for governmental jobs has to be struck down. The exclusion of SC/ST/OBC is a constitutionally prohibited form of discrimination. They form the majority of EWS, and depriving them of the said benefit directly benefits the upper class which has faced no historic discrimination, defeating the very intent of reservation. Article 16(4) is premised on adequate representation, and reservation for EWS is not for lack of representation, thus being unqualified.

A breach of the 50% ceiling limit itself will result in compartmentalisation, and any reservation for EWS will lead to virtual deletion of Article 15(4) and 16(4). The ceiling limit existed to balance reservation and open competition. The amendment legitimizes discrimination by exclusion to benefit targeted group. However the EWS, i.e the targeted group, itself is created by exclusion of economically weaker sections of SC/ST/OBC who remain economically weaker due to being subjected to discrimination in all dimensions.

The majority judgement was delivered by Justices Dinesh Maheshwari, Bela Trivedi and J B Pardiwala, which upheld the 103rd Amendment and accepted creation of provisions for reservation of EWS as permissible affirmative action to ensure inclusion and held that the 50% ceiling limit is not sacrosanct and has been by-passed previously in certain circumstances. The classification for EWS is not an unreasonable one and has a clear purpose of achieving substantive equality. Justice Trivedi held “Just as equals cannot be treated unequally, unequals cannot be treated equally”, and the exclusion of SC/ST/OBC is valid. Reservation, in itself, is not to be continued forever and must be revisited to fulfil the object of having a casteless and classless society. Justice Maheshwari held that compensatory discrimination, wherever applied is exclusionary in character and acquires worth only after exclusion of other classes.

Since the constitutional amendment has been upheld, various states seek to increase reservation above 50%. Jharkhand Assembly passed a bill [7] to increase reservation to a total of 77% for SC/ST/OBC. However an imperative point to note is that the judgement in the said case allows reservation only for EWS, which is a new form of affirmative action. The decision of 50% cap applies to caste based reservation, and not new forms of affirmative actions. Breaching this 50% cap for communities already included in this 50% might be struck down by the court for being in violation of the ceiling limit.

The Majority judgement took note of the UNGA Resolution passed on 25th October 2015, for the eradication of poverty and all its forms. State action, in the form of the 103rd amendment, attempts to eradicate poverty by providing for additional reservation of 10% for EWS. However such reservation will continue for a long period as there will always be poor. Reservation as a solution is itself for a limited period. Now that affirmative action has created reservation for a new class, there is no restriction on how many other classes may be reserved by such action, leaving the question of social equality for the general and unreserved class, an already much debated issue.