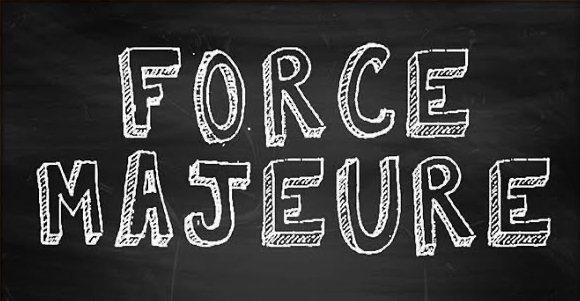 Under a contract, the Force Majeure clause is invoked to safeguard a party from the consequences of non-performance of the contract due to circumstances beyond the control of such party. It is an express provision by way of which the performance of the obligations under a contract may be excused or suspended. The term Force Majeure (“superior force” in French) is defined in the Black’s Law Dictionary “as an event or effect that can be neither anticipated nor controlled”. The Hon’ble Supreme Court of India has interpreted the term ‘Force Majeure’ in Dhanrajamal Gobindram v. Shamji Kalidas & Co. [1] and observed the following:

The term ‘Force Majeure’ has a much wider import than merely an ‘Act of God’ [2] and shall also include an ‘uncontrollable event’ [3]. The Supreme Court in the case of Industrial Finance Corporation of India v. Cannanore Spinning & Weaving Mills Ltd. [4] interpreted ‘Force Majeure’ to include non-performance for reasons of an impediment beyond one’s control which could neither be foreseen at the time of entering into the contract nor can the effect of the supervening event be avoided or overcome. However the Indian Courts have not directly ruled on whether an epidemic/ pandemic like Covid-19 is an ‘Act of God’, an argument to that effect can derive support from the decision of the Hon’ble Supreme Court in the case of The Divisional Controller, KSRTC v. Mahadava Shetty [5], wherein it has been held that the expression ‘Act of God’ signifies the operation of natural forces free from human intervention with the caveat that every unexpected natural event does not operate as an excuse from liability if there is a reasonable possibility of anticipating their happening.

A. The Force Majeure Clause: Phraseology

A Force Majeure provision cannot be implied under Indian Law. It has to be to be expressly provided for under the contract. The phraseology of the Force Majeure clause plays a pivotal role in ascertaining whether a particular event would fall within the ambit of the said clause. Therefore, some clauses contain specific terminologies so as to protect the parties to the contract which may include terms like ‘non-fulfilment of obligations due to restrictions imposed by the Government’, ‘non-fulfilment of obligations due to unforeseen events’ and/or may specifically state the occurrence of such an event like a pandemic, epidemic or a natural calamity.

The burden of proof of the unforeseen event/circumstances that have rendered the performance of the contract impossible shall lie on the party invoking the Force Majeure clause who may also be required to demonstrate that it has taken all reasonable efforts to avoid or mitigate the Force Majeure event and its effects. The Hon’ble Supreme Court in case of Jerryl Banait v. UOI [7] has termed the current Covid-19 situation as a “national calamity”, which phraseology may be helpful in interpreting force majeure clauses in contracts executed between the parties.

B. The Doctrine of Frustration

The Doctrine of Frustration, introduced by the Court of Queen’s Bench in Taylor v. Caldwell [8] provides for temporary discharge of obligation on the ground of impossibility of performance on account of unforeseen circumstances. The said doctrine also finds place under Section 56 of the Indian Contract Act, 1872 (the ‘Contract Act’). The sine qua non for invoking such a clause is (a) existence of a valid contract between the parties; (b) the contract is yet to be performed; (c) the performance of the contract has become impossible due to the prevailing circumstances. It is pertinent to note that the Doctrine of Frustration can only apply to executory contracts and not the transactions, which have created a demise in praesenti [9].For a contract to be rendered frustrated, the change in circumstances must be so fundamental as to be regarded by law as striking at the root of the contract [10].

The word ‘impossible’ under Section 56 of the Contract Act need not be interpreted with respect to physical or literal impossibility. To ascertain whether a contract is frustrated, the performance of an act may not necessarily become physically/literally impossible. The impracticality of performance with respect to the parties and the object of the agreement will also have to be taken into account [11].

Force Majeure and Doctrine of Frustration of contract have been continuously regarded as exceptional defenses in events of complete impossibility. While the threshold of proof shall continue to be high, the Courts will ascertain practicalities of the situation more dynamically. Hence, a surge in the number of commercial contracts incorporating Force Majeure clauses is very likely – to specifically cover situations such as Government imposed lockdowns, epidemics and pandemics, apart from traditional events such as Act of God, natural calamities, etc.