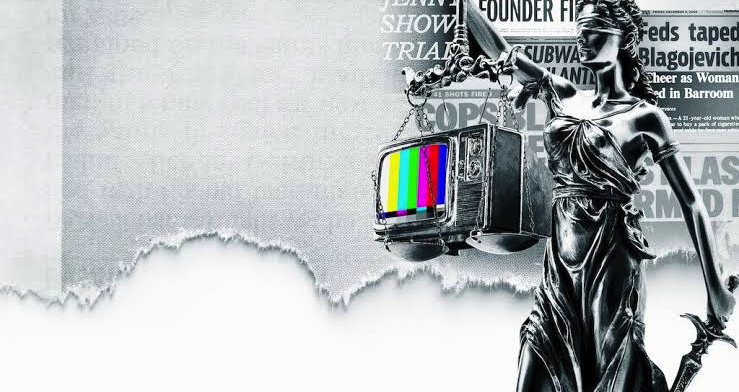 In a democratic country like India, Media Trials is and has always been a much discussed subject covering within its fold a very dramatic and impactful insight both in the print and electronic media. Today, with an alarming increase in the use of television and other electronic mediums, media plays a very important role in as much as shaping the guilt of accused, witnesses and suspects without having felt the need for a fair trial. Therefore, excessive publications of any crime, victim, witnesses, suspects or accused by media resulting into a prejudicial impact on the character of such a victim, witness, suspects or accused amounts to negative publicity. As held by the Supreme Court and House of Lords, such a widespread and strong publicity declaring the guilt of the accused without having gone through a fair trial may also sub-consciously affect the judge on the basis of what he hears or sees outside the court ultimately affecting the trial when it takes place later resulting in deprivation of the individual’s rights to a fair and impartial trial. In that very sense, what it actually does is it dupes its viewers and/or common public to adjudicate the guilt of the accused even before the commencement of a trial which later even if the accused is acquitted and not proven guilty, can have a very great impact on his personal and professional life. Constant excessive coverage, publication of sensitive contents, TV debates of imminent and sub-judice matters greatly interfere with the administration of justice and in capturing the minds of the common public to believe that version as the sole truth under the garb of Freedom of Press.

The power of media is well enunciated in Article 19(1)(a) of the Constitution of India which guarantees freedom of speech and expression, however, at the same time imposes certain reasonable restrictions under Article 19(2) as the media cannot be permitted to have an unregulated and unrestricted freedom amounting to seriously prejudice the rights of the accused having been declared guilty otherwise than by the procedure established in law. Every person is entitled to a right of fair trial and more particularly, Article 21 of the Constitution ensures that no person shall be deprived of his life or personal liberty except according to the procedure established by law.

Generally, media having a very strong force on the minds of people, begins its independent investigations covering the crime and in doing so, creates doubtful reservations in the minds of public weakening the coherent and structured official investigation machinery. In fact, it goes to the extent of interviewing the potential witnesses and following them at all times to compel them to give certain crucial information or names relating to the commission of the crime and therefore, coming to various biased conclusions declaring the guilt of the suspects, witnesses or accused resulting into parallel investigations and parallel trials by Media. However, to ensure the proper conduct of media, the Press Council of India from time to time issues guidelines governing and controlling their conduct which is often not adhered to by them.

With such an increasing and alarming interference of the media in administration of justice, the law regulating the publications of crime or accused or suspects by media have to be well regulated. Section 2 of Contempt of Courts Act, 1971 defines Criminal Contempt. Interestingly, Section 3 of the said Act grants complete immunity to the publisher and in granting such an immunity, much is stressed upon the word “pendency of judicial proceedings” at the date of publication in any court of law. The word “pendency” is explained in the Explanation to section 3 which includes in the case of a civil proceeding, when it is instituted by the filing of a plaint or otherwise and in the case of a criminal offence, the date when the charge sheet or challan is filed after the investigation, or when the court issues summons or warrant against the accused. This clearly means that any prejudicial publication in whatever form published before the date of filing of the charge sheet or challan or issuance of summons or warrant by the Court against the accused will not constitute contempt as per the provision of the said Act. Several other countries including the UK Contempt of Courts Act, 1981 differs with this proposition and in turn has held the date of “arrest” as the starting point of commission of contempt in case of prejudicial publications. The Law Commission of India in its 200th Report on “Trial By Media” has also recommended the date of arrest as the starting point under section 3 of the Contempt of Courts Act, 1971 and not the date of filing of charge sheet after the investigation. Recently, after the excessive media coverage on the death of Actor Sushant Singh Rajput case, Bombay High Court has issued Notice to the Central Government seeking interpretation of Section 3 of Contempt of Courts Act, 1971 in a PIL seeking judicial intervention as to the starting point of contempt being the date of filing of the FIR and not the date of charge sheet at the end of the investigation and also seeking directions of fair reporting by Media in Sushant Singh Rajput Death Case, the said matter is sub-judice. During the several hearings of the PIL, much is stressed upon the issuance of proper guidelines and that such guidelines must be strictly complied with. The Bombay High Court also expressed its concern and categorically stated that “Media should not report in a manner which hampers the on-going investigation in the matter”.

The power of the courts to restraint and postponement in cases of prejudicial publications has been settled by the top Court in Sahara v/s. SEBI popularly known as “Media Guidelines Case” laying the doctrine of postponement and having recognised the power of the Supreme Court and the High Courts in issuing postponement order delaying publication of any judicial proceedings for a certain period of time. In yet another judgement in the year 2012, the Constitution Bench of Supreme Court, while imposing “Lakshman Rekha Guidelines” on media reporting relied on a catena of judgements from foreign countries like United States of America, England, Canada, Germany, Australia and New Zealand along with the judgements of Indian Courts to arrive at a conclusion that postponement of publication of court proceedings in certain cases was necessary to strengthen the balance between Article 21 and Article 19(1)(a) of the Constitution.

It is now very unfortunate that the Media Trials is becoming very common and also that certain authorities are delivering judgements on the basis of such Media Trials. A very classic example of this would be a recent judgement of the Hon’ble High Court of Madhya Pradesh, Bench at Indore wherein the Division bench was pleased to quash the impugned detention Order of the Petitioner’s father who was detained in the Indore Central Jail by the District Magistrate on the ground of total non-application of mind as the impugned order was delivered on the basis of media trials. The District Magistrate had formed its opinion on the basis of news published in Nai Duniya, Dainik Bhaskar, People’s Samachar and therefore was erroneous and suffered from total non-application of mind and accordingly the Madhya Pradesh High Court quashed the same.

To conclude, the media is a very powerful and an important tool in the democratic India. Freedom of speech and expression as guaranteed under the Constitution is its very essence however, such a freedom must not be unregulated or uncontrolled as a large population of this country is dependent on Media and its legal awareness. Media is constantly under a conscious responsibility in shaping the opinions of the common public and establishing confidence in the legal machinery and justice delivery system. Therefore, excessive publications of crime and sensitive criminal matters, independent investigations, suspecting individuals on the basis of such independent investigations, interviewing potential witnesses and constant follow ups interfere with the administration of justice and demolish the confidence of the general public in law ultimately resulting in a biased and unfair trial.