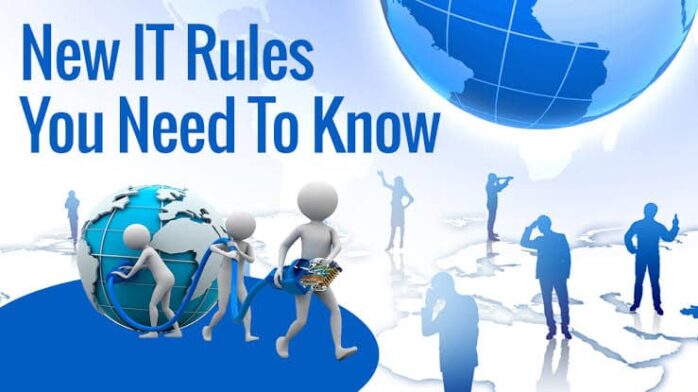 What are the new social media regulations called?

What are these “Intermediaries”?

The term “intermediary” has been defined under the Information Technology Act, 2002 (“IT Act”) with respect to any particular electronic message and means any person who on behalf of another person receives, stores or transmits that message or provides any service with respect to that message.

Like vicarious liability, their arises a liability on the side of the intermediary if any illegal activity is observed by any party on the particular platform.

It can be referred as Intermediary liability- it means that the intermediary, a service that acts as ‘intermediate’ conduit for the transmission or publication of information, is held liable or legally responsible for everything its users do.

What changes are bought in by these rules?

(1) Intermediaries must identify the originator of any malicious content and pull it down within 36 hours of it being flagged. Flagging can be done through a court order or from a competent government agency after which the unlawful information has to be disabled.

(2) Platforms will be required to provide information including related to verification of identity, to lawfully authorized agencies within 72 hours.

(3) Streaming platforms have to classify content into five categories-

(4) Digital News Media Organisations can be directed to remove any content which falls under section 69A of the IT Act, 2000.

(5) Stand-alone digital media organisation need to follow the code of journalistic ethics, laid down by the Press Council of India, currently observed by print media and the cable and TV regulation act, which applies to television news.

(6) The intermediaries have to appoint a grievance redressal officer who will deal with complaints and also have to share the name and details of such an officer.

(7) Social Media Intermediaries have to appoint a chief compliance officer, nodal contact person, a resident grievance officer, all of whom should be resided in India.

What are the offences to be curbed under this regulation?

All the sections mentioned below are from the Information Technology Act, 2000

“Any person who sends, by means of a computer resource or a communication device, –

(a) any information that is grossly offensive or has menacing character; or

(b) any information which he knows to be false, but for the purpose of causing annoyance, inconvenience, danger, obstruction, insult, injury, criminal intimidation, enmity, hatred or ill will, persistently by making use of such computer resource or a communication device;

(2) Section 67- It states the punishment for publishing or transmitting obscene material in electronic form. “Obscene”, here is defined as any material which is lascivious or appeals to the prurient interest or if its effect is such as to tend to deprave and corrupt persons who are likely, having regard to all relevant circumstances, to read, see or hear the matter contained or embodied in it.

(4) Section 67B- Imprisonment of five years or fine upto ten lakh rupees for publishing or transmitting of material depicting children in sexually explicit act etc. in electronic form. For the purpose of explanation of this section, “children” is defined as a person who has not completed 18 years of age.

(5) Section 69A- It defines the power to issue directions for blocking for public access of any information through any computer resource, where-

“The Central Government or any of its officers specially authorised by it in this behalf is satisfied that it is necessary or expedient so to do, in the interest of sovereignty and integrity of India, defence of India, security of the State, friendly relations with foreign States or public order or for preventing incitement to the commission of any cognizable offence relating to above.”

What if the origin of the content is from outside the territory of India?

In the case where the initial origin of the content is from another another nation or outside the territorial jurisdiction of India. The intermediaries have to declare the identity of the user which was the first to forward it into the nation.

For example, an offensive post is originated from a European country. The individual to transmit the post from that country to India has to be held accountable for the same.

Does it violate the immunity provided to intermediaries in section 79 of IT Act?

(1) Notwithstanding anything contained in any law for the time being in force but subject to the provisions of sub-sections (2) and (3), an intermediary shall not be liable for any third-party information, data, or communication link made available or hosted by him.

(a) the function of the intermediary is limited to providing access to a communication system over which information made available by third parties is transmitted or temporarily stored or hosted; or

(b) the intermediary does not–

(c) the intermediary observes due diligence while discharging his duties under this Act and also observes such other guidelines as the Central Government may prescribe in this behalf.

(3) The provisions of sub-section (1) shall not apply if–

(a) the intermediary has conspired or abetted or aided or induced, whether by threats or promise or otherwise in the commission of the unlawful act;

(b) upon receiving actual knowledge, or on being notified by the appropriate Government or its agency that any information, data or communication link residing in or connected to a computer resource controlled by the intermediary is being used to commit the unlawful act, the intermediary fails to expeditiously remove or disable access to that material on that resource without vitiating the evidence in any manner.

The only point to note while talking about the debated collision of section 79 and the new rules is clause (b) of the sub-section 3 of the same. The highlighted text states that upon receiving actual knowledge or after being notified by the government authorities if the intermediary fails to disable the access to the controversial data, the exemption will not be provided to the intermediary.

If we look again at the new rules, it is just compulsory for the intermediaries to share the origin of the post which are against the public morality, interest as well as the one which is against sovereignty and integrity of the nation.

Does it curb the individual’s free speech?

As long as we are on the topic of individual’ freedom of speech being restraint with the new regulation being implemented, it can be said that there are meagre chances of that event to happen. Even before the implementation of this rule, section 66A, 67, 67B & 69A were in existence which put same level of vigilance on social media posts as they will do now.

Such a situation leads to social catastrophes. Thus, not restraining the freedom of speech to an extent is also dangerous to the integrity and sovereignty of the nation.