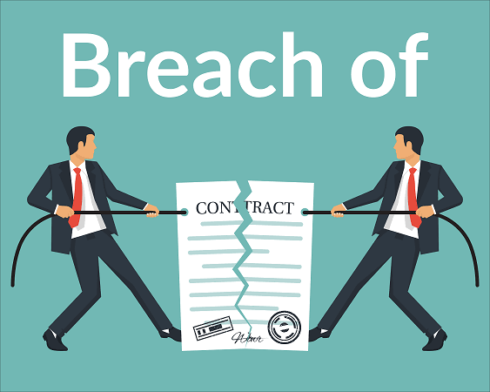 When a person wilfully abstains from performing his duty or imposes a self-made impossibility. Such acts are classified as breach of contract.

When the promised act has not been performed but the performer makes it clear or shows his intention to not perform the contract. In such cases the other innocent party can wish to either continue with the contract or repudiate the contract. In either of cases only payment should be made against actual performance made.

In Aslhing v L.S. John [1] the parties become free from the contract once their repudition is accepted and from then on, they act like they would after completion of contract. Thus, after repudiation both the parties are given right to sue and claim compensation from each other for any loss they have suffered, still exists.

M.P. Mines Ltd v Rai Bahadur Shriram Durga Prasad (P) Ltd [2] held that when performance of contract involves both the contracts mutually and when one of the party defaults, therefore, depriving of the other party to perform their own part. Such defaulting party has held to be guilty of the breach of contract on their part. It has been held in MSK Projects (I) (JV) Ltd v State of Rajasthan [3] that, when two parts of a contract are exclusive of each other and when one part has been performed, the party cannot seek compensation for non-performance of second part.

Apex Court has held in Sunrise Associates v Govt of NCT of Delhi [4] that only two remedies are available in contract. Either it can be some specific performance or some damages available against the same.

It has been held in ONGC Ltd v Saw Pipes Ltd [5], in order to claim damages in breach, it is mandatory on the claiming party to prove that such party has suffered some loss due to the breach. Then, according to the remoteness and quantum of damage some monetary relief can be provided in the form of compensation. Also, in Draupadi Devi v Union of India [6] it was held same that in order to have the right to seek compensation of damages, it must be first proved by plaintiff the measure of converting that loss and the total quantum of loss. Otherwise, the claim seeking damages will rejected on not being able to discharge this proof.

Right to claim damages are of loss of profit over actual loss:

When party does not complete its performance, the other party suffers loss not only on the profit but he also has to give some amount out of his own pocket to engage some other party to complete that performance. In such cases party often claims damage is not only the extra money he had to spend but also the loss of profit, he would have made had there been no such breach. Supreme Court held the above argument right in Dwarka Das v State of M.P. [7]. In Murlidhar Chiranjilal v Harishchandra Dwarkadas [8] court also said that any loss should be quantified using the market rate or price of the particular place or city where the goods were supposed to reach in the normal course of conduct.

Along with it, in famous case of Karsandas H. Thacker v Saran Engg Co Ltd [9]; when a middle man enters into contracts for buying from one party and them selling it to other party, suffers any loss due to late delivery by the first seller cannot classify as loss in profit. It should be unknown to the first party that the person was going to sell it to another party.

Although the court have taken cognizance in some cases like Union of India v Steel Stock Holders’ Syndicate [10] there can be tremendous delay in delivery of goods. Though there was no time limit but the non-delivery of goods blocked the party’s money blocked because of frozen delivery. Hence, he was able to recover the money along with interest upon the said amount.

No Forfeiture of earnest money: The court has once in Maula Bux v Union of India [11] and even in Union of India v Rampur Distillery & Chemical Co Ltd [12]. There could not be any forfeiture of money nor any compensation given because the plaintiff failed to show (in both those cases, government) that they had suffered any loss because of the non-performance.

The Supreme Court in rare occurrence allowed for the forfeit of earnest money in when it found it reasonable to do so. The court in Shree Hanuman Cotton Mills v Tata Aircraft Ltd [13] allowed the party to forfeit the money which plaintiff had submitted as partial requirement with the defendant as partial requirement of contract, because it was specifically mentioned in the contract; the court upheld it. Although it has been held by the Supreme Court in K.P. Subbarama Sastri v K.S. Raghavan [14] that a party with more power cannot compel such weak party to comply with unfair and oppressive terms and conditions.

This provision has given the liberty to parties to enter into contracts along with previously deciding the amount of penalty which a party may receive as damages from the party breaching the contract. This has given the rights to both parties to liquidate damages beforehand and mitigate extra stress of litigation.

A person who rightfully rescinds a contract is entitled to compensation for any damage which he has sustained through the non-fulfilment of the contract [15].

Generally, it is seen that the party who rescinds from a contract has to face suit and give compensation to the other party. While in those general cases the party rescinding party, rescinds before the full performance of the contract; hence have to make compensation. Whereas this section gives right to the person when he rightfully rescinds after facing loss due to non-fulfilment of performance of other party in contract.